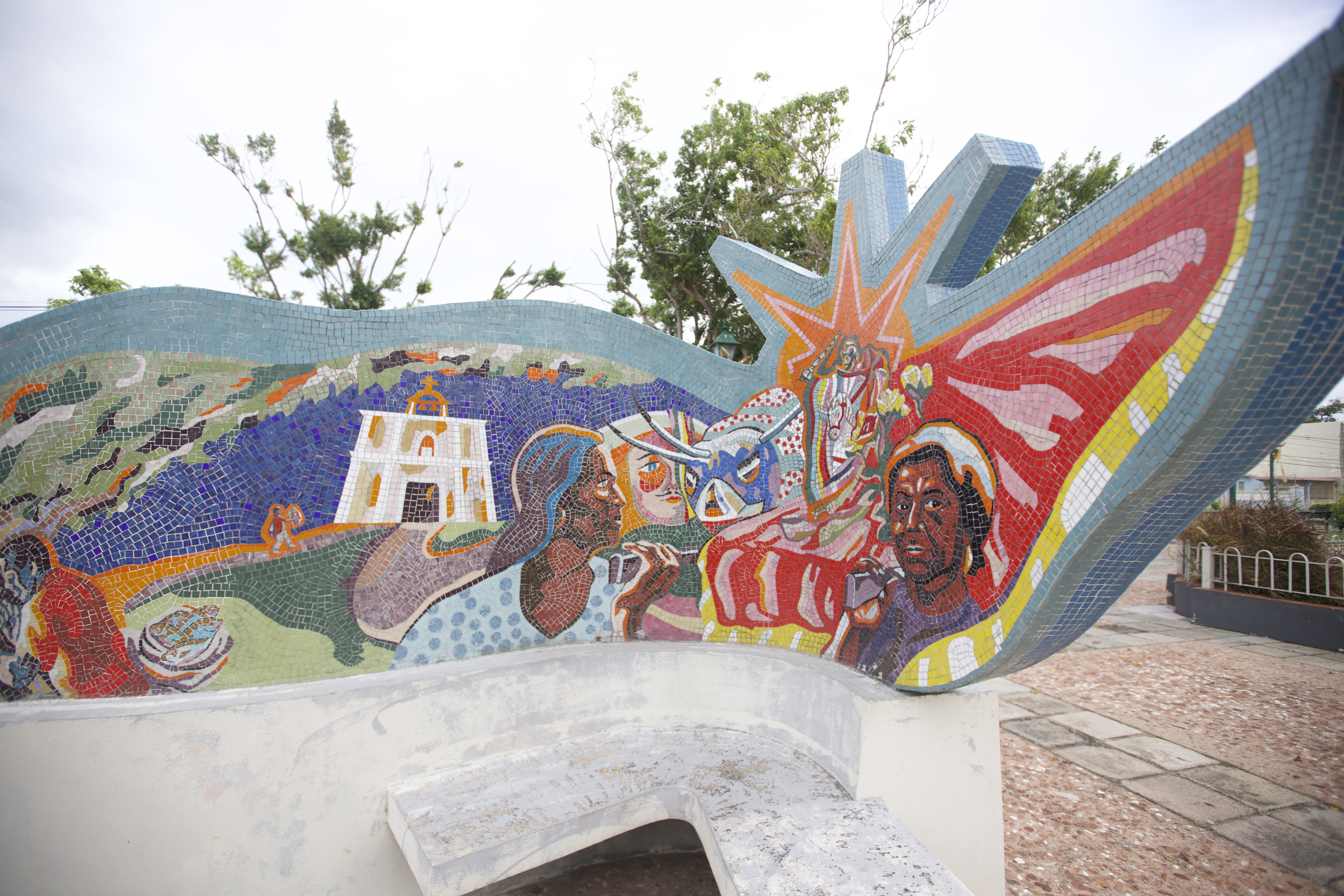 Hard Times for the Center of Afro-Antillean Culture

LOÍZA, Puerto Rico – The rich smell of arroz con habichuelas rises from Minerra Ramos-Osorio’s small kitchen to the front porch. She is preparing lunch while enjoying the midday weather and neighborhood company. 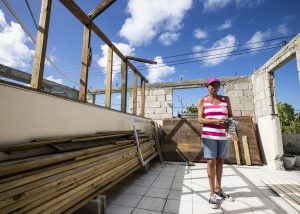 As she waits for the food to finish cooking, she walks back and forth from her small kitchen to the gated porch. A steady stream of children, dogs and chickens line the small street.

The second floors of most of the homes in the neighborhood are missing. Brick walls stand barren, revealing the concrete and wooden structures that once upheld the walls of rooms in people’s houses.

Ramos-Osorio’s home is no different. Almost a year and a half after Hurricane Maria demolished the second floor of her house, she still is able to use only the first floor of her home in the small Melilla neighborhood in Loíza.

“Not even to my worst enemy I would wish them what happened to us, really,” Ramos-Osorio said through tears.

At the time of Hurricane Maria’s landfall, she lived in a small wooden house but decided to evacuate to her mother’s house, a sturdier, concrete, two-story structure. But it, too, was ravaged by the storm.

“The ceiling was torn off from the second floor, and the water fell under the second floor of the house on to the first floor,” Ramos-Osorio said with a grimace on her face, recalling the painful memories of the hurricane. “All of this was filled with water. Awful.”

Ramos-Osorio was born and raised in Loíza, a coastal municipality in the northeast region of the island. Just 30 minutes east of the metropolitan capital of San Juan, Loíza prides itself as la capital de la tradición (the capital of tradition) and is the center of Afro-Antillean culture.

U.S. Census data shows that 64 percent of people in Loíza identify as black, and the population’s median household income is $17,000, nearly $25,000 less than the median income in Mississippi, the state with the highest population of African-Americans.

Loíza’s history runs deep. The municipality is home to María de la Cruz Cave, where indigenous people of the island settled and lived, their remains dating as far back as the second century B.C. 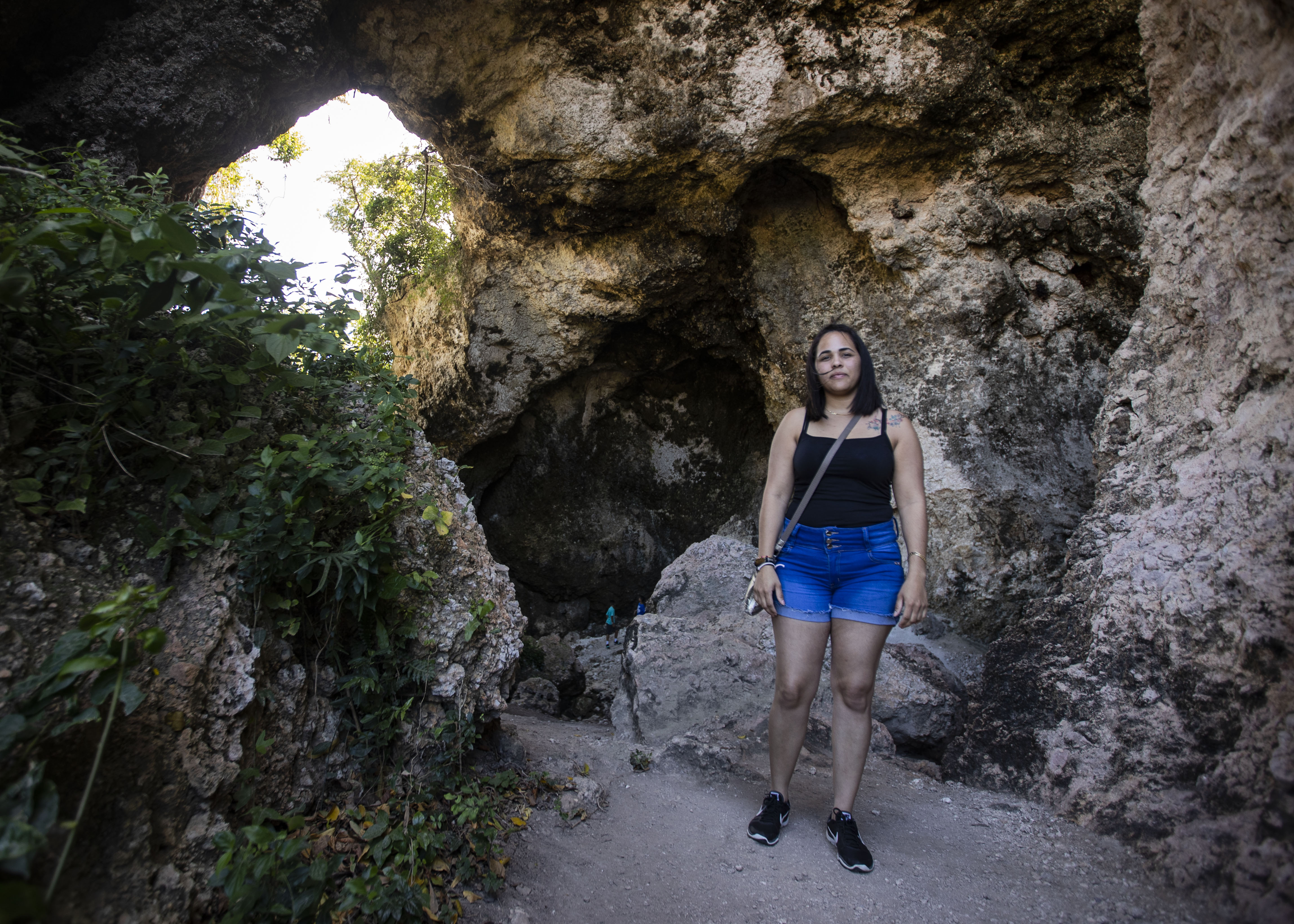 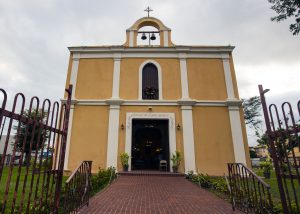 Located in the heart of Loíza is Parroquia del Espíritu Santo y San Patricio, one of Puerto Rico’s oldest Catholic parish churches. Built in the 1600s, it is the oldest church still in operation on the island. In fact, many locals temporarily lived in the church in the days immediately following Hurricane Maria.

Loíza, with a population of about 30,000, was one of the towns with the highest percentage of deaths from the hurricane. It is estimated that more than 700 people in Loíza died from storm-related causes. The town also lost 853 homes, with another 3,000 houses damaged, according to Loíza mayor Julia Nazario. Loíza was without power for nearly three months.

The town also has one of the highest poverty rates on the island, with nearly 50 percent of the population living in poverty. The long-term effects of the hurricane were drastic.

“It was devastating,” Nazario said. “We had a lot of people left without homes, a lot of sadness and pain. We had a lot of sick people affected that died during that process because of a lack of medicine and of medical equipment that needed power in order to work.”

Nazario said immediately after the hurricane’s landfall, there were approximately 39 deaths, but in the following months, “Loíza became the town with the most deaths.”

Despite this loss, people in Loíza are working to recover from the hurricane, both economically and emotionally.

Loíza native Andrea Tejada graduated from college in 2016 and began working as a manager in a store in San Juan. After Hurricane Maria, she lost her job and was forced to move with her young daughter to her mother’s house in Loíza.

“It was sad because it was hard to get the apartment [in San Juan], hard to get a job, and just because of the hurricane, I lost everything in one day,” Tejada said. “I lost my furniture. I have a little girl. She lost all her toys, all her clothes. Everything got damaged because of the water.”

Eventually, like thousands of other Puerto Ricans, Tejada made the decision to leave the island. According to 2018 Census Bureau estimates, nearly 130,000 Puerto Ricans left the island from July 2017 to July 2018.

Estimated amount of Puerto Ricans who left the island from July 2017-July 2018.

Percentage of Loíza population who identify as black

She said FEMA paid nearly $12,000 for her and her daughter to live in a hotel for one month in Manhattan after they relocated from family members’ houses and local shelters. Tejada and her daughter returned to Puerto Rico in June 2018 to be closer to family.

She plans to enlist in the U.S. Army because she said she can’t find a job where she can use her criminal justice degree in Puerto Rico. Tejada will give custody of her daughter to her mother and join active duty military personnel.

“I have thought about it for a long time. I’m leaving [my daughter] in good hands because that’s my mother,” Tejada said. “[The military] gives you a lot of opportunities, but I’m going to do it just to give [my daughter] what is best.” 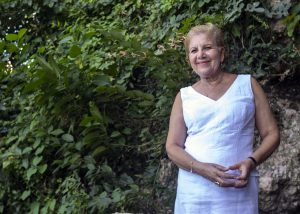 According to Mayor Nazario, the federal government’s response to aid Puerto Rico after Hurricane Maria was “very sad, very regretful.”

“We have not received what we are supposed to from FEMA, and the federal government has been absent,” Nazario said. “We have made it with the help of non-profit organizations, foundations and individual people that have made donations to Loíza.”

One non-profit organization, Serve PR, stepped up to help the people of Puerto Rico after the damage had been done by Hurricane Maria. Carrie Bacon, Serve PR executive director, started the organization with her friends after the hurricane.

“Our main mission [was to] deliver food and supplies around the island,” Bacon said. “We headed to Loíza with a car load of food and served a hot meal and clean water.”

Serve PR, a San Juan-based organization, began a partnership with Loíza and stocked buses for shipment to the town with supplies, like water purifiers and diapers. They also helped those in need of medical supplies.

“I think of us as blessed because of all the help we received,” Nazario said.

Tucked among the bright, colorful homes and storefronts in Loíza is the Castor-Ayala Craft Store and Gallery. The tiny shop displays the artwork of Raúl Ayala and his family, and through the artwork, the shop preserves the island’s origins.

Ayala learned his craft from his father keeps alive the family tradition of mask-making. Not only is it a part of the Ayala family history, the art also represents the history of Loíza. Ayala makes “vejigante” masks out of coconut, which grows on the island.

The bold mask features long horn-like figures, bold colors and wild expressions that are worn for the folkloric St. James Festival in July in Loíza. The celebration commemorates St. James the Apostle and combines African and Spanish traditions.

For Ayala, the masks are more than artwork. It is also a proud display of his Puerto Rican roots. 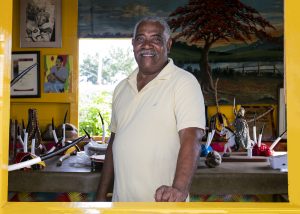 “We are the only town right now in Puerto Rico that kept our black tradition,” Ayala said. “The original root of our town, our country of Puerto Rico, originally were the Taíno Indian, the Spaniard and the African. We are also African, and this is very important for us.”

Hurricane Maria hindered coconut’s growth in Puerto Rico, making it more difficult to make masks. He has customers who want to buy his creations.

“I am ashamed because I can’t give them masks,” Ayala said.

However, both Ayala and Mayor Nazario express similar sentiments about the strength of the Puerto Rican people.

“We are a warrior people, and we are still fighting the struggle,” Ayala said.

“Puerto Ricans are strong. Happiness is inside of us,” Nazario said. “You see we are already being reborn. We are alive. We received Maria’s impact with a lot of pain, but we confront it with a lot of bravery.”

Minerra Ramos Osorio, too, is grateful to be alive. She said a contractor who promised to help fix her house took her money and did few repairs. She has applied for aid from nonprofit foundations. She gardens and cleans her yard and cooks for her neighbors to stay busy and stave off depression.